The Luxembourg and French governments signed a new tax treaty (the Treaty) that amends the current treaty that was concluded on 1 April 1958 as amended from time to time. The Treaty reflects some of the latest developments on the international level on the provisions that were included in the 2017 version of the OECD Model Tax Convention (the OECD Model) as a result of the discussions carried out on the OECD Base Erosion and Profit Shifting project (BEPS). 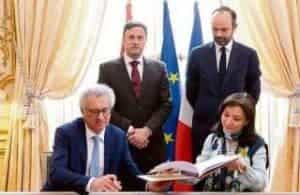 Please find below the most salient features of the Treaty:

A resident of a Contracting State is any person that by virtue of the legislation of that State, is “liable to tax” in that State. The Treaty expressly entitles treaty benefits to French partnerships (sociétés de personnes) or French groups (groupement de personnes ) or similar persons provided that (i) they have their place of effective management in France, (ii) they are subject to tax in France, and (iii) whose partners are fully taxable in France.

The Treaty also excludes a trustee or a fiduciary who is not the beneficial owner of the income.

Undertaking in collective investments (UCI) will benefit from the application of article 10 (dividends) and 11 (interest) of the Treaty provided that (i) this UCI can be assimilated as a UCI of the Other Contracting State and (ii) the beneficiaries of the UCI are residents of France or Luxembourg or of a State that has concluded a mutual assistance treaty on the fight against tax evasion and avoidance with the Source State.

2. Permanent Establishment – Article 5 of the Treaty –

A building site or construction site or installation project constitutes a PE if it lasts more than 12 months. In order to compute the twelve months period for an enterprise that carries out its business in the other Contracting State in a place that constitutes a building site, separate periods of 30 days which don’t exceed 12 months are considered and any related activities performed on the same building site during separate periods of more than 30 days each by one or several enterprises that are closely related are also added.

A PE is also constituted where a person in a Contracting State, habitually concludes contracts or habitually plays the principal role leading to the conclusion of contracts that are then routinely entered into without modification by the Company.

The dividend article has the most significant impact and is amended as follows:

8. Elimination of Double Taxation – Article 23 of the Treaty –

The Treaty switches from the exemption method to eliminate double taxation to the credit method for French residents. Under the method, the State of Residence can tax all sources of income but it will

provide a tax credit for the tax burden already incurred in the State of source. For Luxembourg residents the exemption with progression method remains applicable.

The Treaty introduces a principal purpose test. Treaty benefits will be denied if it is reasonable to conclude, having regard to all facts and circumstances, that obtaining the benefit was one of the principal purposes of any arrangement or transaction having resulted directly or indirectly in the grant of the benefit except where the grant of the benefit is in accordance with the object and purpose of the provisions of the Treaty.

In addition, the Treaty does not prevent France from applying its domestic anti-abuse rules such as rules on Controlled Foreign Companies or interest limitations.

The Treaty reflects the willingness of the Luxembourg and French governments to comply with the latest developments at the OECD level and in the European Union. The Treaty has a significant impact on the institutional real estate industry, since it closes a loophole related to French properties held by a French Investment Fund such as an SPPICAV or SIIC which is itself held by a fully taxable Luxembourg company. In that regard, the Treaty affects the competitiveness of Luxembourg and will require further analysis. The Treaty strengthens the power of the French tax authorities to challenge some Luxembourg structures and some provisions such as the principle purpose test remain to be tested. It will be of utmost importance for the Luxembourg companies to meet appropriate substance requirements. The Treaty provides some beneficial solution to multinational enterprises with the elimination of the withholding tax when the beneficiary is a legal entity that has held a minimum of 5% interest in the capital of the company paying the dividends over a period of 365 days.

Please do not hesitate to contact us should you have any queries.

DISCLAIMER : The information contained herein is of a general nature and is not intended to address the circumstances of any particular individual or entity. Although we endeavor to provide accurate and timely information, there can be no guarantee that such information is accurate as of the date it is received or that it will continue to be accurate in the future. No one should act on such information without appropriate professional advice after a thorough examination of the particular situation.